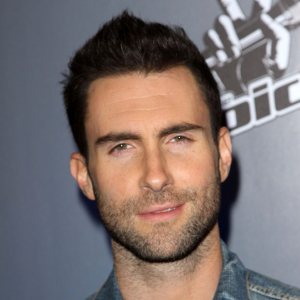 Adam Levine is off the market, ladies. I know, it’s a really tough time. But we’ll get through it together.

The tattooed Maroon 5 frontman is tying the knot with Victoria’s Secret Angel Behati Prinsloo. Could he have picked a girl with a weirder name? Her name is really the only thing we can pick on her for, since she’s a stunning beauty on Levine’s arm.

Levine’s rep confirmed the news to E!, saying that he popped the question over the weekend in Los Angeles. The Voice judge will be heading out on tour soon with Maroon 5.

Behati and Adam Levine started dating about a year ago, shortly after his longtime girlfriend, model Anne Vyalitsyna, broke things off. Levine was said to be heart sore after the breakup. The new couple were spotted getting intimate in Hawaii, then headed to a pal’s wedding in Kauai. They were said to be holding hands and having fun during the pre-ceremony.

Levine and Prinsloo broke up shortly earlier this year and he was seen with another woman in June 2013. Another model, Nina Agdal, accompanied Levine to Cabo San Lucas. That was short lived and Behati and Adam reunited.

Levine told Details magazine in a past interview, “There’s two kinds of men: There are men who are f–king misogynist pigs, and then there are men who just really love women, who think they’re the most amazing people in the world. And that’s me.”

“Maybe the reason I was promiscuous, and wanted to sleep with a lot of them, is that I love them so much.”