The Voice: Adam Levine “I Hate This Country” 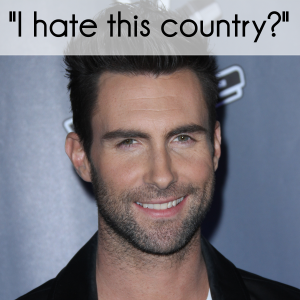 The Voice judge Adam Levine got caught by a live mic during the eliminations on Monday night, saying “I hate this country” when his singers went home.s_bukley / Shutterstock.com

Tell us how you really feel, Adam Levine.

Last night’s The Voice captured a rare moment of Adam Levine’s real feelings, but fans really took it out of context. During the elimination, two of Adam’s prized team members – Judith Hill and Sarah Simmons – were voted off.

“I hate this country,” he whispered into a hot mic.

I understand his anger, Simmons and Hill were fantastic. However, he doesn’t really hate the good ole red, white and blue. He just hates a portion of it. A hot mic caught Levine’s words that were meant only for him.

New York Daily News reported that some Americans believed Levine should be deported, but few came to his defense. Those that did defend the Maroon 5 singer said that America tends to favor country singer Blake Shelton’s team.

Levine tweeted the definitions to misunderstand, lighthearted, humorless and joke after America caught his words. He was completely joking about hating America and only “hates” the portion of America that didn’t vote for his singing queens.

“I obviously love my country very much and my comments last night were made purely out of frustration,” Levine told Us Weekly. He went on to say that he is extremely passionate about The Voice and got emotional during Sarah Simmons and Judith Hell’s eliminations. “My comments were made based on my personal dissatisfaction with the results.”

Levine only has one team member left in the competition, country singer Amber Carrington. After this patriotic mess, I wouldn’t be surprised if Carrington’s scores suffered next week.