Alexander Skarsgard Likes to Be Naked

On last night’s Conan, True Blood star Alexander Skarsgard talked about his best feature – everything. In most of Skarsgard’s role he tends to flash skin, muscles and teeth regularly. The ladies can’t get enough of him, and he said that he’s pretty comfortable with taking it all off on screen. 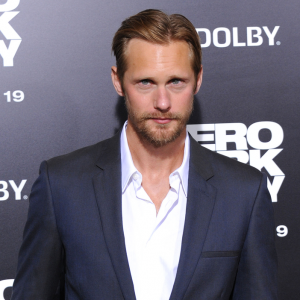 “I don’t think it’s about being proud of your body our not, it’s kind of being comfortable,” he said that his family background and living in Sweden, nudity is less stigmatizing.”

Stellan Skarsgard Used to Cook in the Nude

Skarsgard went on to say that he comes from a line of hippies, “I think I was 14 the first time I saw my dad wearing pants.”

Stellan Skarsgard, Alexander’s father, is a stage and film actor. Alexander said that his dad used to cook in the buff. He said that when he wasn’t at the theater, he would be at home cooking “without clothes on,” he added with a shrug.

While Conan was worried about grease popping up and singing important, tender areas, Alexander said, “It’s not that big so it’s fine.”

WHOA. Did he just say his dad had a small – nope, he was taking about the stove.

“Dad’s going to love this little chit chat,” Conan said with his head in his hands.

Skarsgard said that it wasn’t until he and his brother starting bringing girls home that it got a little out of control. He said his father used to walk in – sans clothing – and introduce himself. People were usually very comfortable with it.