It is confirmed! American Idol has its very first finalist married couple! Diana DeGarmo and Ace young were married on Saturday, June 1, 2013 at the Luxe Sunset Boulevard Hotel in Los Angeles. The couple couldn’t be happier!

DeGarmo told E! Online, “When we turned the corner and I saw Ace at the altar it was beautiful.” She also told People Magazine, “This was the best way to start the chapter of my life as Mrs. Young. I’m over the moon with joy and happiness about our wonderful wedding. I can’t wait to spend my life with my husband!” 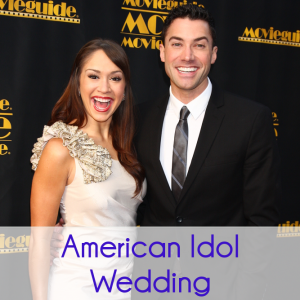 Young made it clear that he felt the exact same way just thinking of marrying DeGarmo. “I was crying before I even saw Diana walk around the corner.” He told People Magazine, “Today was the best day of my life. Diana and I are in it forever. She’s my best friend.”

The wedding came together in such a fairy tale way. DeGarmo’s brother, David, who had been in Afghanistan, wasn’t sure if he was going to be able to make it home for the wedding. Luckily, David made it home in time to walk his beautiful sister down the aisle. DeGarmo tells E! Online, “It took every ounce of strength I had not to burst into tears,” when seeing her brother had made it home.

Diana DeGarmo looked amazing as she walked down the aisle in her very form fitting gown, made by designer Sareh Nouri. The gown featured a pearl laced floral design, accented with rhinestones. Strauss, who has also planned weddings for mega stars Heather Locklear and Valerie Bertinelli, told People Magazine, “It was the first dress she tried on. She knew immediately that it was the perfect dress for her.”

She accessorized the gown with a beautiful pearl-looking belt. The artist even chose to wear blue cowboy boots! DeGarmo tells People Magazine, “Believe it or not, the boots totally worked!” She didn’t seem to be the only one who though so either. Even Strauss had to admit, “If you didn’t know better, you’d think the dress and boots were made for each other.”

Strauss knew she had to make this wedding a memorable one. The artists wanted everything to be exactly as they envisioned it being. Their input was very important in the decision making process, while planning the wedding.  Strauss told People Magazine, “They wanted to put their personal touch on the wedding. We all worked together to make sure every detail was special.”

The wedding also featured a harpist, who played as DeGarmo walked down the aisle. Young and DeGarmo also had six flower girls preceding the bride down the aisle. Each little girl was a niece of either the groom or bride. The girls each carried a basket full of flowers, and also containing a word. The words were a special message for Young, “Hey Ace. Here Comes Your Bride.”