The 2013 Billboard Music Awards were held at the MGM Grand Garden Arena in Las Vegas, meaning bright colors, glitter filled gowns, and fashion surprises around every corner! While some celebs seemed to have dressed themselves in the dark with no mirror, a few stood out from the crowd for their exceptionally stylish looks. 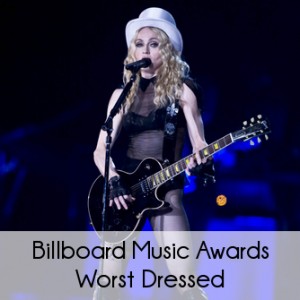 The Billboard Music Awards 2013 had the critics split. Everyone loved Selena Gomez & Taylor Swift, but Madonna and Z LaLa are tied for worst dressed. (digitalsport-photoagency / Shutterstock.com)

Taylor Swift was “stealing the spotlight at the 2013 Billboard Music Awards,” according to E! Online. She wore a beautiful blue Zuhair Murad dress. The dress length went to about mid-thigh, showing off Swift’s legs.

Selena Gomez brought out the neon colors, while keeping it very class. She wore a stunning floor length white Atelier Versace gown. The gown also featured a thigh-high slit, where the tip of the slit seems to meet a see through cut out area, which ran clear to the top of the dress. The white gown was accented with a neon pink and neon yellow band, running from shoulder to shoulder. Gomez looked stunning, and very grown up. New York Daily News reports, she accessorized with Jimmy Choo heels and Neil Lane jewelry.

Artist Z LaLa showed up at the 2013 Billboard Music Awards dress in what looked to be a Lady GaGa costume cast off. The outfit was a metallic mess, with shoes to match. What looked like tin foil was folded in an odd, fish scale pattern across the singer’s body. There were what seemed to be wings, and possibly used to ensure the artists behind was covered, coming off her shoulders and lower back area, also made from the same shiny material. E! Online says, “that is probably the closest thing to space alien couture we’ll see on this planet.”

Madonna, who accepted the Top Touring Artist award, looked like she didn’t know she was going to a red carpet event when she showed up in thigh high black stockings, a fishnet skirt, black panties, a feathered collar, fishnet gloves, and a studded belt with chains hanging from it. VH1 went as far as saying the pop icon was dressed like a “two-cent tramp.” E! Online chose to look passed the awkward attire, and focused on her body, saying she’s working it at 54!