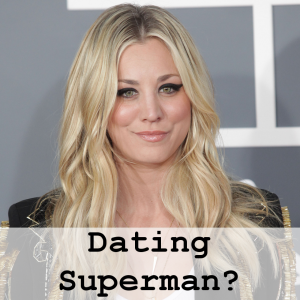 The Man of Steel has found his Lois Lane. Henry Cavill, star of the latest Superman reboot, is reportedly dating The Big Bang Theory’s Kaley Cuoco. While it seems like a huge jump for the Superman star to be dating a television actress, Kuoco has actually got an impressive resume herself.

The Big Bang Theory is the number one show on television, with reruns and TBS marathons scoring higher ratings that some first run episodes of Modern Family. E! News confirmed that Cuoco and Cavill are a pair. She recently split from her boyfriend Bret Bollinger and used to date co-star and on-screen love Johnny Galecki.

While Cavill is supposedly the most coveted bachelor in Hollywood right now, he’s been going through ladies like Snickers bars on Halloween. He was seen out with Gina Carano in January, months after splitting from fiancee Ellen Whitaker. Carano and Cavill split up not long after.

Cuoco said in an interview that she is either in a relationship or not, she doesn’t date around or deal with the messy “talking” phase. Judging by Cavill’s dating record of late, I’m a little worried for Cuoco. If Superman breaks her heart, I just hope Leonard is there to catch Penny before she falls.

Can’t she just get back together with Johnny Galecki? I would choose a Leonard over a Superman any day.