Ouch, this one stings. Danielle Fishel, famous for her role as Topanga on Boys Meets World, was interviewed in the March issue of Maxim and had a funny story about Bob Saget, of Full House fame. 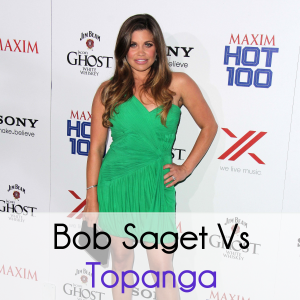 Boy Meets World’s Danielle Fishel (Topanga) was attacked by comedian Bob Saget about a Maxim article. She tweeted back at Maxim that they had it wrong. s_bukley / Shutterstock.com

“We were trying to take a nap, and all of a sudden Bob Saget walks down the aisle, rips open out curtain, and shouts, ‘Do you guys have an coke?!” Then he looks my dad in the eye, laughs, and closes the curtain.”

When the comedian heard the tale, he took offense.

“What show was she on? Big Chest, Small Wonder’? That’s the real size of her, by the way. She’s kind of like Bilbo Baggins, very tiny,” Saget said.

After offending the beautiful actress, he went on to tell his side of the story.

“So first off, I don’t open curtains. That was a lie, because I don’t do that. I knock on things. Also, there weren’t separate compartments on the plane. Anyway, the whole thing was as simple as me going to the restroom and throwing out a one-liner. I was always making jokes; that’s what I did. Yes, it did have a drug reference in it, but the joke was that her parents should protect this kid who was starring in a television show. It was just a funny thing, like a satiric moment of, ‘What are we doing with our kids?’ I wouldn’t expect someone to understand it if they don’t get that kind of humor.”

His last word on the subject was to criticize Topanga’s age and say she looked ancient. As a person that has never found Bob Saget funny, I have to say: stick a fork in it, you’re done, Saget.

Danielle Fishel Fires Back at Maxim & Bob Saget on Twitter

Danielle Fishel got the last word in this story. She tweeted that Maxim didn’t add in the end of the story. Apparently, she did get his strange joke.

“Maybe you should have printed what I said at the end ‘we knew he was joking. It was funny,'” she tweeted last week. “He didn’t pick up on that.”