The perfect actress has passed on her perfect role. When we first heard that directors were casting for the Hillary Clinton biopic Rodham, there didn’t seem to be a perfect person for the job. Names like Jessica Chastain and Reese Witherspoon were thrown around, but nothing really stood out. 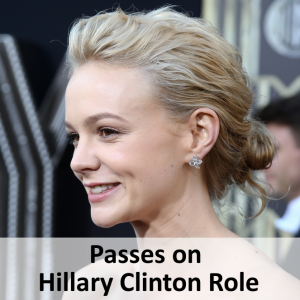 Then, Carey Mulligan met with director James Ponsoldt last week. The casting gods smiled down on the film. These two look so similar, and knowing Mulligan it would be a top notch performance. Something that could earn her serious recognition.

The Hollywood Reporter says that Mulligan turned down the offer to play Clinton in her years as a young lawyer on Capital Hill during the Watergate years. The search will go on, but everyone will pale in comparison to Mulligan.

Producers of Rodham Consider Their Search for Hillary

Rodham will center on Hillary Clinton “as a young lawyer on the committee involved in President Richard Nixon’s impeachment,” according to The Hollywood Reporter. The film will see her trying to balance her feelings for future President Bill Clinton and her burgeoning law career.

Names now on the table for the role include Chastain, Scarlett Johnasson, and Emma Stone. Of those, Chastain is the obvious choice for her awards and performances, but I’d like to see Emma Stone or Scar Jo take on the role.