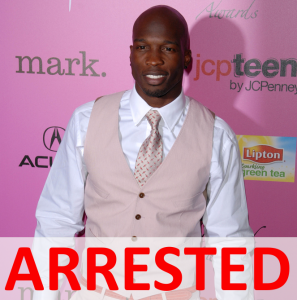 The only thing that would make this story funnier would be if his name was still “Chad Ocho Cinco.”

TMZ reports that Chad Johnson was booked into jail at 10:46 a.m. PT, but let’s rewind to how this all snow balled horribly out of control. Johnson was standing trial for his recent probation violation for domestic violence. As the case was going to be closed, the judge asked if he was satisfied with his lawyer. Johnson slapped his male lawyer’s butt causing the courtroom to laugh.

That’s when things got ugly. The judge confronted Johnson and asked is he was taking this seriously. His lawyer tried to stand up for him, but the Broward County judge was having none of it. She said that nothing was funny about his situation and she would not accept the plea deal.

Chad and his lawyer went back into court to try and apologize, but the judge kicked Johnson out. He was arrested in the courtroom and ordered to serve 30 days in jail. Had the judge accepted the plea, Johnson would have plead guilty to violating his probation, extended probation for three months, and attended counseling sessions twice a week.

Check out the video of Chad Johnson’s court appearance below. It’s sad and funny all at the same time. Best of luck, Chad.