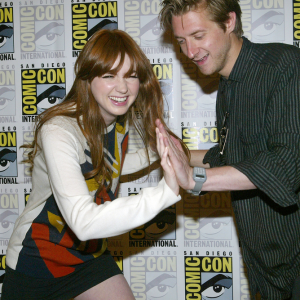 Hair envy is a real thing. You may not think it’s that big of a deal, but you know that one person where you look at their hair and think, “Man, I wish I had that.” Curly haired people want straight, blondes sometimes wish they were brunettes, and this brunette wishes she were a red-head. In fact, Karen Gillan, who played Amy Pond in Doctor Who is my hair goddess.

That is until she did the unthinkable. Gillan showed up to Comic-Con in San Diego to be a part of the Guardians of the Galaxy panel. She’s playing Nebula, a character who is bald. Gillan sported red shoulder length hair with bangs, but shocked the fandom by peeling it off her head when a fan asked about her character’s hair.

“I might have done something a little bit crazy.”

The wig matches Gillan’s hair exactly, leading me to believe it was once her hair or professionally dyed to troll us all. Either way, a knife went into my gut when I saw she had shave her glorious red hair. As Amy Pond, Gillan’s hair was always long, wavy, and luxurious. It will take some getting used to for fans, but she loves it.

“It’s liberating,” she told Comic-Con crowds. “I think everyone here should shave their heads.”