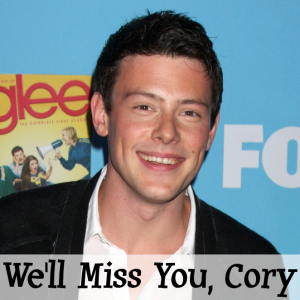 Cory Monteith, 31, was found dead in his hotel room in Vancouver on July 13. Pay tribute to the fallen Glee star and read how Matthew Morrison is taking it. Helga Esteb / Shutterstock.com

Watching the series premiere of Glee, I fell in love. This kid named Finn Hudson was fumbling around while trying to dance, was mooned over by Rachel Berry, and sang “Don’t Stop Believin‘.” Over the next few years, I watched Cory Monteith grow into his own on the series. Although I eventually stopped watching Glee, I never stopped loving Cory Monteith.

When we heard that Cory Monteith had passed away on July 13 2013 in Vancouver, my world seemed to stop. I didn’t know Monteith personally, but I know that he was a decent guy. He loved his girlfriend, Lea Michele, he was trying to get his life back on track after a lifelong problem with drug abuse, and he had the biggest smile. I walked around in a fog for most of the weekend, and I’m still greatly saddened by the headlines and speculation.

Monteith was alone when he died, say police. There is no indication of foul play and they are not releasing what was found in his room. The coroner is performing an autopsy today in an effort to find out what ended Monteith’s life as quickly as possible. The police said in a press conference that there will be an investigation to his death.

Among those remembering Cory Monteith is friend and co-star Matthew Morrison. Morrison played Mr Schuester, Finn Hudson’s mentor. He broke out a show tune from A Chorus Line, also performed by Lea Michele on Glee, “What I Did For Love.”

Morrison called Monteith his brother and said he would always love him.

“You came out to see a show,” Morrison told the crowd. “I came out to do one, so let’s honor Cory with this performance.”