Downton Abbey fans will remember Dan Stevens starring up at the sky, blood running down his face. But a new look at Steven reveals a recent dramatic weight loss. 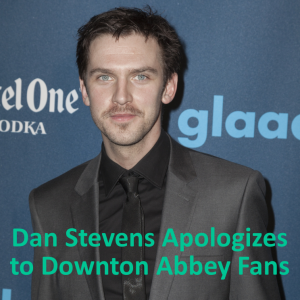 “I’ve lost about 30 pounds since New Year, which, in British terms, is about two or three chins,” Stevens joked with British talk show host Graham Norton on The Graham Norton Show.

“It was for a role. It’s always me, just different incarnations, different roles, different costumes and different sizes. As for the hair, it’s pretty much my natural color. I went very dark for the last role, but I’ll see where I go with it.”

The new look is reminiscent of Keanu Reeves in Much Ado About Nothing. Dan Stevens even has a mustache and soul patch going on. He is currently promoting Summer in February, where he’s playing a man caught in a strange love triangle, reports E! News.

As for the shocking death that haunts my dreams, Stevens said it was a very difficult decision to leave the series, but it was his own. He said he was very shocked at the way the writers chose to end Matthew’s life.

“I knew Matthew would die, but not like that necessarily.”

Stevens recently apologized to fans in an interview with Radio Times magazine. “I am sorry about that! I think what emerged is that it’s an unwritten rule that you’re not supposed to die on British television on Christmas Day, and that, specifically, was not my doing.”

He went on to say that he was glad that Matthew Crawley “didn’t run off and have an affair with somebody.” He said it would not have been right for his character. The only option was death.

The next season of Downton Abbey is scheduled to premiere in the U.S. on January 5 2014. It will focus on Lady Mary as she moves on from Matthew’s death and rebuilds her life.