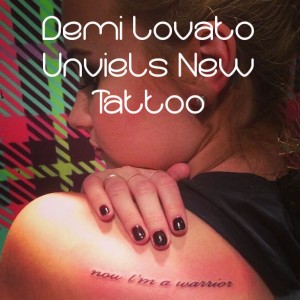 Demi Lovato’s new tattoo is inspired by “Warrior,” an extremely emotional song off of her new album, Demi. She said the song made her feel naked. (Image Credit: Demi Lovato / Twitter)

This girl is “Unbroken,” stands tall like a “Skyscraper” and now she’s proclaiming that she is a “Warrior.” Demi Lovato has to be one of the most inspiration women, even if you don’t like her music. She’s managing bipolar disorder and is a voice for anti-bullying campaigns. In between her personal life, Demi finds time to live a happy life and make music that just pours from her soul.

Demi came out recently, Demi’s fourth album, is full of music to inspire and lift you up. While she, of course, gives you breakup soothing musical aloe vera, Demi is an album about strength.

That’s why Demi’s new back tattoo is so perfect. She got “now I’m a warrior” written in cursive on her left shoulder. The tat is simple, elegant and strong, just like Lovato and her music.

Demi told Ryan Seacrest that her music has always been very personal, but “Warrior” take the cake for the most emotional.

“I wrote it about something that I had never really talked about before and I’m pretty open with my story,” Lovato said. “but the lyrics kind of say it all it in that song … It was really emotional and hard for me to write that song because I was so vulnerable and was so raw with the lyrics. And just when you’re in the recording booth and you’re singing a very vulnerable song, there were tears. It was intense, and it’s heavy. When I play it for people I almost feel like I’m naked in a way, like I don’t want to be in the room when people listen to it.”