Daily dose of cute time. Disney released the trailer for their next animated feature film, Frozen. The trailer is adorable and a throwback to the days of Ice Age and Scrat the Squirrel protecting his nut. 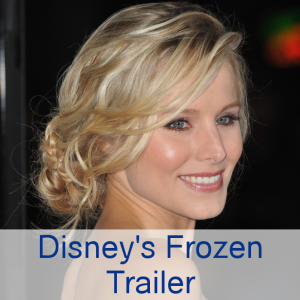 Frozen Trailer Review: Olaf the Snowman Vs Sven the Reindeer

Meet Sven and Olaf. Olaf is a laughable little snowman with a big carrot nose. Olaf is Disney’s Reindeer version of Bullseye the Horse (Toy Story) and Maximus (Tangled).

Olaf is walking through the snow and stops to smell the roses – except, he’s allergic. So he sneezes his poor carrot across the frozen lake. Sven sees the carrot from far off and they grapple across the slippery surface to get the carrot.

All’s well that ends well. Sven runs and grabs the carrot, giving Olaf his nose back and gaining a friend. Except, Olaf is allergic to Sven too and he sneezes his head off.

Frozen may not have many details yet, but the cast is more than enough to draw you in. Jonathan Groff voices Kristoff, the mountain man, and Kristen Bell playys “fearless optimist” Anna. Idina Menzel (Wicked) also lends her voice to the film, playing Anna’s sister Elsa.

Anna and Kristoff set off on a mission to find Elsa, whose “icy powers have trapped the kingdom of Arendelle in eternal winter,” according to the official synopsis. They meet trolls, harsh winter conditions, Olaf and Sven.

Songs are expected in Frozen and it’s being made by the same group that did Tangled. The film is expected to open November 27 2013 and it’s trailer will appear with Disney’s Monsters University.