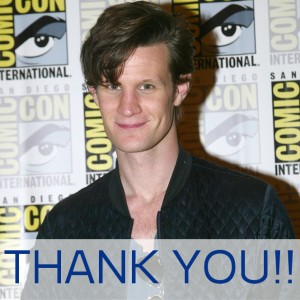 Whovians, we know how much Matt Smith means to the Doctor Who world. While it was earth shattering to say goodbye to David Tennant, I think it might be harder to say good bye to our raggedy old Doctor, Matt Smith.

Smith is leaving the series after this year’s Christmas special. He apparently didn’t learn from Dan Stevens (Downton Abbey) about dying on Christmas. I know, the Doctor can’t die, but still. It means a whole new guy comes in and he has to win Whovian over. We’re a tough crowd. We don’t settle for anything less than the best.

On a movie shoot in Detroit, a buzz cut sporting Matt Smith made a very personal message to the Whovians. He starts out just flipping pages that he’s written on and goes slower once he gets to the personal goodbyes.

After thanking the “marvelous crew” of Doctor Who, Smith started the heart wrenching ones. “To the crazy ginger one,” meaning Amy Pond and Karen Gillian, “to the one with the nose and the funny bones,” meaning Rory Williams-Pond and Arthur Darvill, “to the impossible girl in the short red dress,” Clara and Jenna Coleman, “and to the pen, the scribe, my mate Moff,” MOFFAT!

Most of all, Matt Smith thanked the fans. Without those that watch the show, he wouldn’t be the Doctor that we love and need. Even though Smith’s message was a simple one, he’s always going to be the eleventh Doctor.

So thank you, Matt Smith. For giving us a reason to believe in the impossible and to try fish fingers and custard and to wait for good things and for helping us believe in something crazy. Thank you.