Amanda’s love life has gone all wrong. Just like everything else in her life. 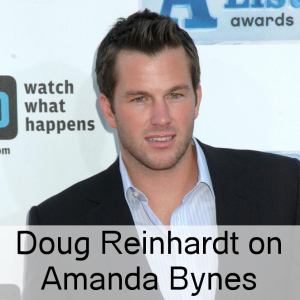 Baseball star Doug Reinhardt spoke candidly with tabloid “OK!“ about his short lived relationship with Amanda Bynes. From his account, it was certainly no picnic in the park.

“She would go crazy for no reason!” Doug stated.

He went on to say, “She wouldn’t even let me have a guys’ night out without flipping out on me, so it was over. We were spending every day together and it just was too much to be around all the time.”

After the swift break-up, Amanda allegedly showed up at Doug’s apartment. “She kicked the doors, threw rocks, bricks, screaming that Doug was cheating,” an insider shared. Another source revealed that she even “threatened to kill his bird, smash his cars.”

And this was going to accomplish what???

The relationship was doomed from the start. It shouldn’t even be called a relationship… how about we call it like we see it… One-Night-Stand! With Amanda there is no telling what she was or is thinking, obviously her thoughts are not coming from a clear mind. She exhibits behaviors of co-dependency, insecurity, obsession, and a need to control everything.

I hate to break the news to you Amanda but, it will never happen.

To top it off, an unnamed ex-friend of Amanda’s shared this with Hollyscoop; “Walking into her apartment was like walking into an episode of ‘American Horror Story,’ she had dozens of mutilated, bloody dolls all over the floor. It was her ‘homage to hell.’ She wanted to be surrounded by death. It was honestly scary.”