Looks like Daisy is finally getting out of kitchen duty. Downton Abbey‘s little kitchen maid is getting an upgrade in her next role, reports Hypable. Sophie McShera is close to nailing down the role of a wicked stepsister in Disney’s upcoming live action Cinderella and I think she’s picture perfect for the role. 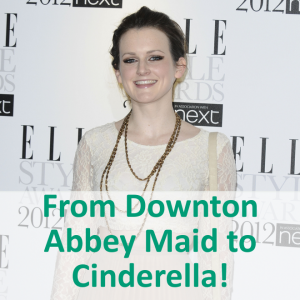 The Hollywood Reporter says that McShera will join Holliday Grainger (The Borgias) as an evil step sis to another Downton darling, Lily James playing the title role. Game of Thrones dearly departed Richard Madden (Robb Stark, R.I.P.) will be playing Price Charming. Rounding off a cast of newish faces, Cat Blalnchett brings her experienced acting prowess at the evil stepmother, Lady Tremaine. This casting has made my life!

Lily James appeared in Downton as the mischevious cousin Lady Rose. The one that went to a night club with a married man? She and Madden will be quite the pair. Speaking of Richard Madden, has a more perfect prince ever been cast? In the list of men that are real life Disney Princes, he’s right between Zac Efron and James Marsden.

Sophie McShera’s meek and mild nature on Downton has been waning lately. Daisy is a widow and she’s moving on up, with an offer to take over her father-in-law’s farm. She’s being much more outspoken and attracting the attention of the male housestaff. Yes, Ed Speelers, we all saw you checking out our girl, Daisy.

Cinderella is expected to release in late 2014 and is shooting in England this fall. The cherry on the top of all of this: Kenneth Branagh is directing. UGH. I don’t know how I will wait until 2014.