We’re pretty used to our girl Joan Rivers being a wild card. She’ll throw out shade and criticise your shoes without so much as blinking. On this episode of Dr Oz, Joan comes to talk about her body image, struggle with bulimia, and the death of her husband Edgar. It’s about to get real. 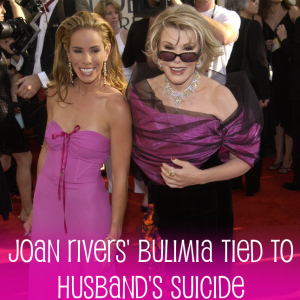 Joan Rivers told Dr Oz about her struggle with bulimia and how many plastic surgeries she has had since age 32. She gets through life with laughter. Featureflash / Shutterstock.com

Joan will never leave a conversation without making someone laugh. She said that this is because she’s insecure about herself. Dr Oz was shocked that in all of her years comedy, Joan Rivers hasn’t conquered her body image demons. She said that she’s aging and her body is a lot different now. It’s starting to make her crack.

In the midst of her body image struggles, Joan Rivers struggled with bulimia. After her husband Edgar committed suicide and she was fired from Fox, Joan remembers telling her doctor that bulimia was the only thing she felt she could control.

Unlike most people, Joan Rivers felt that her bulimia was “fabulous.” She felt great, full all the time, and gave her a sense that her world wasn’t unraveling. She no longer struggles with bulimia and he life seems pretty stable. She’s living with her daughter Melissa and her grandson.

Working back to Edgar’s suicide, Dr Oz got serious. Joan made a movie about her late husband’s death, starring Melissa and Joan. It was a first for the times to talk about something so deeply personal.

The critics were not pleased with Joan’s film. She said she got an outpouring of letters from movie goers that thanked her for making the film. It was almost 21 years ago that Melissa Rivers answered the phone call and learned of her father’s death. She was the first person to know and it still upsets Joan to this day. Melissa was just 16 and Joan wasn’t sad that her husband killed himself, but angy. She was angry that he left her to clean up his mess and left her to deal with life and others grief.

The Rivers family got through the ordeal with laughter, the best way they know how.

Dr Oz: How Many Plastic Surgeries Has Joan Rivers Had?

While Joan’s comedy shocks the world, sometimes her face shocks them more. Over the years, Joan has had 16 procedures, beginning at age 32. She said that there is no procedure she would not consider having done. Plastic surgery is about feeling good and gaining self confidence.