Rick Springfield told us why he wants Jessie’s girl, but he’s rarely opened up about the darker side of his life. The voice of the 1980s, Springfield won a Grammy Award for his song “Jessie’s Girl.” Little did the world know, Springfield was suffering from extreme depression. 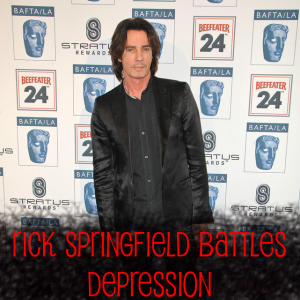 The energy in Dr Oz’s studio built Rick Springfield up. He said that it feels good to know that his fans are still around. In his eyes, his life has been a roller coaster, not of just ups and downs in his career, but major emotional ups and downs. Springfield would go from feeling on top of the world one day, to wanting to end his life the next.

Depression makes a person feel worthless. They don’t get joy from everyday things. We’ve all seen the commercials for antidepressants. Well, those sad blankets and little rain clouds are not funny to someone that is really going through those emotions. Rick Springfield told Dr Oz that he had everything he wanted in life – a family, a home, chart topping hit songs – but he knew that therapy was the one thing that would make him feel better about himself. Taking a break from music was needed when his therapy didn’t work.

In Springfields memoir, “Late, Late, at Night,” he was open and honest about his suicide attempt. He told Dr Oz that he was failing school in every way. His grades weren’t good, he felt like the ugly duckling, and had little to no connection to girls when all of his friends were coupled up. He said it got so bad that he stopped going to school and a friction was felt in his family.

On a particularly dark day, Springfield got into a fight with his mother. She stormed out of the house and he was left with his dark feelings and demons. He went to the garage, got rope and tied a noose. He threw the rope over a rafter and tried to hang himself. Just as he was going unconscious, the rope broke and he fell to the floor.

A far cry from the days of Jessie’s Girl, Rick Springfield’s newest song is titled “I Hate Myself.” He said his drive in life is coming from feeling inadequate in everyone else’s eyes. He sings about being a “one man wrecking crew.” While it’s a dark song, Springfield said that music, and humor, have helped him get through life.