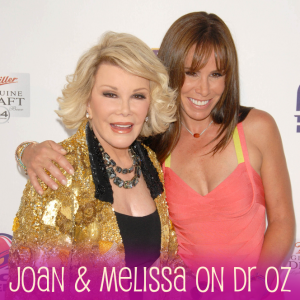 Dr Oz August 2 2013 features an interview with Joan Rivers and her daughter Melissa. Learn how to Feng Shui your bedroom and how many surgeries Joan’s had! s_bukley / Shutterstock.com

On August 2 2013 get ready for an episode of Dr Oz that will shock and amaze you. Everyone’s favorite fashion critic, Joan Rivers and her daughter Melissa Rivers are hanging out with Dr Oz for a very candid and personal interview. Joan is known for her honesty to the point of offense, but she’s also a gracious and generous woman. On August 2 2013, get ready for a shock as Joan tells Dr Oz about her life.

Joan Rivers is not the evil witch we all think she is. In fact, Kelly Osbourne recently told The Talk that Joan visited her every day after she suffered a mysterious seizure. Joan knows her entire staff and every person that works for E! Fashion Police.

Get ready for the side of Joan that very few people see. When we say she’s uncensored, we don’t mean Joan is spewing curses. Rivers opens up about her cosmetic surgeries and the period in her life when he husband committed suicide. It not only affected Joan, but deeply affected her daughter Melissa.

In addition to Joan’s triumphs and troubles, Melissa Rivers opens up to Dr Oz about her smoking habit and gets a remedy for bad breath from Dr Oz. Plus, what she wants her mother to stop doing!

Also on this episode of Dr Oz, get ways to feng shui your bedroom. You can improve the flow of your home and get better sleep at night just by moving a few objects around. Plus, Dr Oz has a recipe that will boost your metabolism.

Check back here tomorrow afternoon, August 2, for the full episode with Joan and Melissa Rivers!