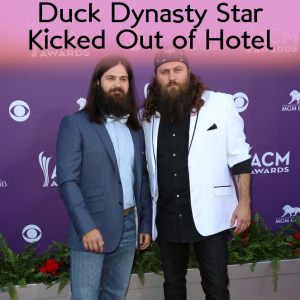 Duck Dynasty star Jace Robertson was mistaken for a vagrant and escorted out of his New York City hotel.

Being a reality television star normally means you are recognized everywhere you go. But when you are hiding behind a beard and sunglasses most days, I’d say you run a really low chance of being mobbed in the streets of New York City.

Duck Dynasty star Jace Robertson told Live! with Kelly & Michael that he was kicked out of his hotel in New York City this week when the concierge thought he was a homeless man. He said he was walking around the lobby, trying to find the bathroom. When he asked the front desk, he was walked out of the hotel and told to go down the street.

Coming back into the hotel a few minutes later, Robertson met back up with his wife who was curious about his disappearance. He said he was kicked out of the hotel, but laughed it off good naturedly, saying the guys just “didn’t know.”

Will this change how Jace dresses? Probably not. He and his brothers appeared on Kelly & Michael in their usual camo and American flag bandanas.

The Robertson clan have been in New York promoting the fourth season of their show Duck Dynasty on A&E, premiering tonight, August 14. In the season premiere, the Robertson kids and Uncle Si plan an anniversary surprise for Miss Kay and Phil Robertson.

Turns out, Kay and Phil never had a real wedding. Korie, Willie’s wife, bands the Robertson women together to throw a vow renewal for the heads of the Robertson clan. Much to their husband’s distaste, the women try to include them in the planning.