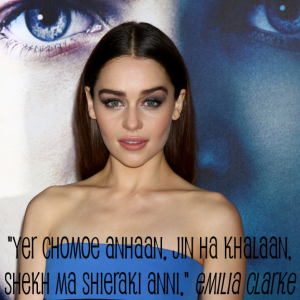 If the Dothraki have anything to say about it, Emilia Clarke will be taking home an Emmy for her performance in season three of Game of Thrones. Clarke plays Daenerys Targaryen,  the Khaleesi and Mother of Dragons.

The LA Times talked to Clarke after he learned about her Emmy nomination. She expressed her joy in the best way she knew, Dothraki.

This translates to “You do honor to me. This is for the Khal – my son and stars.”

Clarke’s role as Daenerys has been a fan favorite. She’s elegant and strong, one of the strongest women in television. She speculates that the Emmy voters really enjoyed her strength and the strengths of the character.

Clarke’s amazing acting and performance really adds to an already wonderful series, based on the Song of Ice and Fire novels by George R.R. Martin. Writers on the series David Benioff and D.B. Weiss were nominated for their work on the series as well. In all, Game of Thrones pulled in 17 nominations.

“It’s so brilliant that it’s impossible not to take it very realistically and to see the realism in the writing,” she said. “It’s so believable, it’s so real, that there’s not a moment that you’re thinking, ‘I’ve got three dragons in front of me and everyone’s killing everyone.”

Emilia Clarke said she has read all 10 scripts for season four of Game of Thrones. She didn’t think that it could get much better than season three, but oh, was she wrong.

“I’m reading it with my jaw to the floor. Season 4 is phenomenal.”

She also said that watching the most controversial episode of season three, featuring the Red Wedding, was hard, but she was glad she wasn’t there.

“At least I know I’m safe. I’m over on the other side of the sea. And anyway, my dragons would burn you all.”