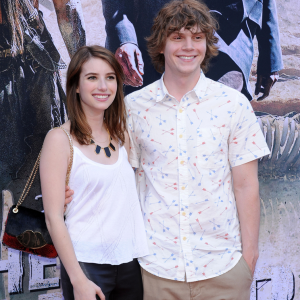 Evan Peters is not pressing charges against his girlfriend Emma Roberts, who was arrested for domestic abuse in Canada on July 7 2013. DFree / Shutterstock.com

Chock this one up to a huge misunderstanding… maybe. Emma Roberts was arrested in Canada on July 7 for attacking boyfriend American Horror Story star Evan Peters. The two were having a fight in their hotel room and guests called the police after hearing the altercation go down.

Roberts was arrested for domestic violence after the cops saw Peters’ injuries. It’s reported that he had a bloody nose and bite marks. Friend close to Emma say that she would never have bitten her boyfriend. Sources say that both parties were hitting.

Emma was seen out and about this week with very obvious bruises and a bandage on her elbow. It’s not certain that these are from the altercation or from her current role on American Horror Story: Cover. She and Peters are working together for season three.

Emma Roberts and Evan Peters have been dating since 2012, where they met on the set of their movie Adult World. They were first spotted making out at a screening at L.A’s The Grove.

“It was an unfortunate incident and misunderstanding. Ms. Roberts was released after questioning and the couple are working together to move past it,” both stars’ reps told HollywoodLife.com.

Emma Roberts & Evan Peters Get In Fight At Hotel in Canada

Peters did not press charges against Roberts. They were seen kissing earlier this week. Peter’s tweeted on June 26 2013 that Roberts was “the love of my life” while hanging out. Roberts has been tweeting since the incident, but it doesn’t seem to have phased her. She’s much more concerned with the fact that Delta airlines lost her luggage and delayed her flights.