At the end of The Bling Ring, Nicki Moore tells her followers they can go to Nicki Moore Forever.com to follow her life and projects. While I know I searched the web for every combination of “Nicki Moore Forever” I was unable to find anything. Thank God, someone else did. 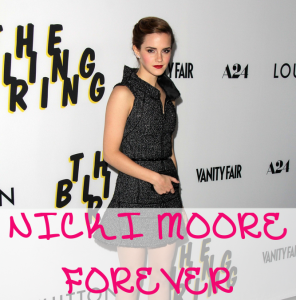 Styleite found a hilariously horrible Tumblr “NickiMooreForever2012” that Watson created to get into character for her role. Since Nicki Moore is Emma’s polar opposite, it makes sense that she tried other ways to get inside Moore’s head.

The blog only has a few posts, but they drip with the essence of Nicki Moore. She chose a zebra print background, stolen from Shutterstock, and a selfie of herself in a mirror. She posted videos fauning over Audrina Patridge and her idol Angelina Jolie. Watson even talked about her show Pretty Wild getting cancelled.

“The character is everything that I felt strongly against — she’s superficial, materialistic, vain, amoral. She’s all of these things and I realized that I hated her. How do you play someone you hate?” Watson told British GQ in May. “But I found it really interesting and it gave me a whole new insight into what my job, or my role as an actress, could be.”

Watson’s Tumblr is still up. You can view it here.