While some teenage girls can’t wait to be grown up and alluring, the most sophisticated and elegant woman of them all doesn’t want to be objectified. Emma Watson told W Magazine that she didn’t want to grow up. 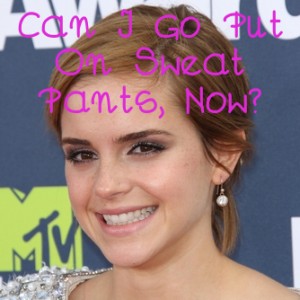 Emma Watson told W Magazine that she loves being comfy in a sports bra. She said that she isn’t quite ready to grow up just yet. (s_bukley / Shutterstock.com)

“I’ve never wanted to grow up too fast. I wanted to wear a sports bra until I was 22!” she said. “The allure of being [seductive] never really held any excitement for me. I’ve never been in a terrible rush to be seen as a woman.”

Watson recently turned 23 and is turning heads on every red carpet. She was seen just the other day on the Cannes red carpet for The Bling Ring. Emma Watson grew up in a world of flashing lights and camera crews. Despite her star status, she attended university in America and strives to have a normal life.

Emma Watson Hates Herself in The Bling Ring

The role that has everyone buzzing is Emma playing a Hollywood socialite out-of-control in The Bling Ring. Watson has said that the previews make her seem like a major character, but she’s really a minor part of the newest Sofia Coppola drama. The reviews are saying that Watson has completely left Hermione Granger behind in the new role.

Emma Watson has also said that she can’t stand herself in the film. The character is so unlike the reserved and modest style that Emma embodies.

“Who wouldn’t love to go to work in Uggs and very low-slung tracksuit bottoms? The iconic detail of Nicki is her tramp stamp. It’s a lotus flower, a Buddhist-like symbol just above her butt crack. Really classy!” Emma laughed. “And at one point I told the costume designer, “You can see my bra strap in this top; shouldn’t we pin it?” And she said, “No, sweetie—Nicki is all about her bra strap showing.” I was like, Right, okay, different mind-set.”

The Bling Ring debuts at the Cannes Film Festival and will make it U.S. premiere on June 14 2013.