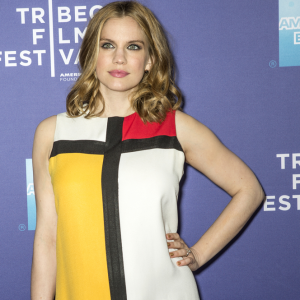 While we still get teary eyed thinking about Anna Chlumsky’s break through role in My Girl, she’s getting misty eyed today for a whole new reason. Chlumsky welcomed her first child with husband Sean So on July 11 and announced the bundle of joy’s name today. Welcome to the world, Penelope Joan So!

Chlumsky, 32, and So, 32, married five years ago. They broke the news of Penelope’s birth to People magazine.

“She’s a really good mix between my husband and me,” Chlumsky gushed. “When she’s with him, you see him, and when she’s with me, you see me. She’s a perfect mix.”

Chlumsky went on to say that her baby girl has her mouth and a full head of hair. Penelope’s eyes change color is different light.

“I’m really surprised how real it is. What’s really strange is how fast it happened. You prepare for so long, and all of a sudden the baby’s here. It’s seriously the best thing.”

While Chlumsky’s favorite thing right now is holding her baby girl, she will have to hand her off to a babysitter on September 22 2013. She just received word that she’s been nominated for a Primetime Emmy! She’s nominated for Outstanding Supporting Actress in the HBO comedy Veep. Co-stars Tony Hale and Julia Louis-Dreyfus are also nominated.

“I’m still in shock. It was neat because it was me and my husband and my daughter all in the room getting the news at the same time,” Chlumsky said. “When [my manager] told me, it was that nervous, happy, appreciative laughter. I just laughed a lot! It feels really great to have your work noticed.”