Giant Colin Firth as Mr Darcy in Lake in London 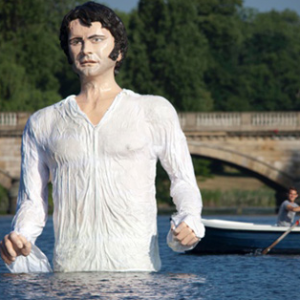 A giant tribute to Mr Darcy has been erected in a lake in Hyde Park, England. The wet tee-shirt Mr Darcy/ Colin Firth will be going on tour soon. (i-Images, PacificCoastNews.com; BBC)

Holy, Darcy. Pride & Prejudice fans around the world have a new Mecca. a 12-foot statue of Colin Firth as Mr. Darcy from the BBC’s Pride & Prejudice has been raised in the Serpentine Lake of Hyde Park in London.

The statue really does not do Darcy and Firth justice. It has a pretty realistic wet, white shirt effect, but the face is just not as dream-boaty. Firth in 1995 was bigger than any One Direction member ever will be. Even though I’ve never seen the BBC mini-series, I have a deep appreciation for the Colin Firth rising from the lake scene.

This giant tribute to Mr Darcy was voted as that most memorable moment in the history of British drama, reports E! Online. It has been erected in honor of U.K.’s newest TV channel, Drama.

The sculpture is made out of fiberglass and two three sculptors over two months to make. Time Out London reports that the statue will find a permanent home in Lyme Park in Cheshire, but it will be heading out on a tour first.

Personally, I love the idea. It’s hilarious, so I can’t seriously swoon over it. Maybe if they erect a tribute to Matthew Macfadyen from the Keira Knightley adaptation? I wouldn’t mind a replica of that gazebo where he professes his love for her.

Mr Darcy just looks very lost in the middle of the lake. The funniest part is seeing boaters rowing around him, giving the sculpture an “Are you serious?”

Would you go to see a fiberglass Mr Darcy/Colin Firth on tour?