It’s been nearly two years in the making, but Hanson has finally revealed their new beer, Mmmhops. The name of the beer, Mmmhops, is a clever play on the groups 1997 hit song “MMMbop.” The former boy band set out in November of 2011, with the idea of creating a great craft beer.

The drummer of the band, Zac Hanson, told The Huffington Post, “It’s vital our fans have trust in everything Hanson do. We are soon going to be selling our own beer. I’m not joking – Mmmhop IPA anyone?” 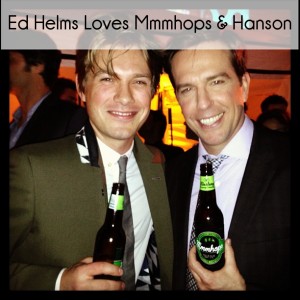 Hanson debuted their official IPA beer, Mmmhops, at The Hangover Part III premiere. The beer is expected to be on shelves soon, but is being perfected. (Hanson Music / Twitter)

According to Beer Pulse, the band approached Mustang Brewing, located in Oklahoma, with the idea of creating the beer. Hanson also calls Oklahoma home, which made it the perfect place to unveil their beer, and hold the first tasting. The end result is a pale ale, with the exact recipe still being perfected.

The new ale is shown in The Hangover Part III, giving the new brew all the publicity it needs to get started. The mega popular trilogy that is The Hangover will surely boost sales of the new beer.

E! Online reports that the band brought their beer to the movie premiere after party and they brought enough to share. The band was quoted as saying, “You can now get a hangover with Hanson.”

The beer seemed to be a hit at the party. Ed Helms, star of The Hangover Trilogy, was seen in a photo on instagram drinking the beer, and posing with Taylor Hanson, during the party.

When Will Hanson’s Mmmhops Be Available to the Public?

The beer that was sent to the premier will not be the same beer we, as the public, will get to drink. The exact formula is not even complete yet. Hanson told Beer Pulse, the beer would be available “this month.” However, that does not seem likely.

Mustang Brewing founder, Tim Schoelen, told Beer Pulse, “The product that was sent to the premiere was a sample batch and for promotional purposes only. The final recipe is yet to be determined. In fact, Hanson was in our brewery this week working with us on a pilot brew. They’re great guys and serious craft beer fans. We look forward to working with them.”

When the brew does become available, all the publicity surrounding the product will only help. The anticipation of the new pale ale, paired with its role in The Hangover Part III, is sure to create a new fan favorite.