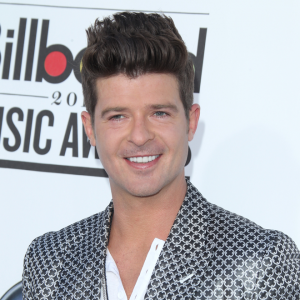 Robin Thicke said that working with Miley Cyrus on his next song or on her album is a possibility and we could see her Twerking in his next video! Helga Esteb / Shutterstock.com

The people with the two hottest songs of the summer are without question Miley Cyrus and Robin Thicke. Miley’s “We Can’t Stop” has been on my replay list everyday since it’s release. Combine that with her sudden transformation and you have a hit. Thicke’s “Blurred Lines” is getting major radio airtime and the music video was deemed too hot for YouTube. Men and women love Robin Thicke’s sound, no matter what he’s singing about.

Thicke collaborated with Pharrell Williams and T.I. on the single, which recently bumped Jay Z’s Magna Carta Holy Grail to number two in the UK. Thicke told E! News at the iHeartRadio theatre that he would definitely consider it.

“There might be, there might be. Pharell was working with Miley when Pharell and I made ‘Blurred Lines.’ He was just finishing up with her when we started recording together.”

E! went on to ask him if he would put the Queen of Twerking in his next music video, to which he responded, “Never say no. I’m not good at saying no.”

Miley is currently gearing up for her album release on August 26. She tweeted to fans on July 22 that she would reveal the album title once she reaches 13 million followers. We have a little while to wait. In the meantime, Miley is shopping the London Chanel till she drops.