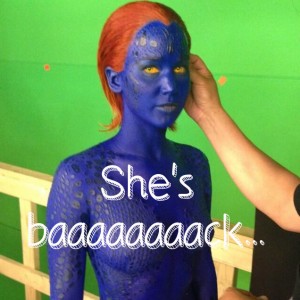 Jennifer Lawrence put her blue body paint back on this week to reprise her role as Mystique in X-Men: Days of Future Past. (Bryan Singer / Twitter)

Hollywood’s busiest sweetheart, Jennifer Lawrence, goes from project to project. Just a month ago she was on the set of American Hustle with Bradley Cooper in Boston. This week, the Oscar winning actress is looking a little blue on the set of X-Men: Days of Future Past.

Lawrence is back in her Mystique blues to film the sequel to X-Men First Class. Director Bryan Singer tweeted a photo of the star. “First look: #JenniferLawrence as a vengeful #Mystique. #XMen #DaysOfFuturePast”

For the first X-Men, Jennifer Lawrence wore makeup and body paint that took hours for six makeup artists to put on.

“I’m excited because I’m going to wear a body suit,” she told E! Online in February. “[The body suit] will be from neck down so it will cut out time and the blisters.”

It’s hard to tell from the photo whether The Hunger Games star got her body suit, but I don’t think Seth MacFarlane will be singing about her chest anytime soon. X-Men: Days of Future Past will hit theaters June 18, 2014.