Ansel Elgort Cast in The Fault in Our Stars

Ansel Elgort is probably another name you’ve never heard of if you don’t read YA fiction. That’s understandable. He’s starring in the films based on the “Divergent” series by Veronica Roth. But his big, break out role is bound to be as Augustus Waters. The film of John Green’s popular YA novel is not only going to bring droves of teenage girls to theaters, but leave everyone tears. 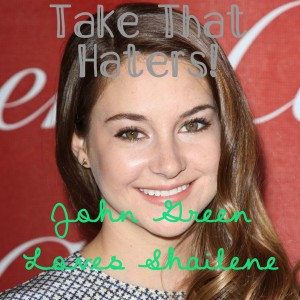 John Green, the author of “The Fault in Our Stars,” has approved both Shailene Woodley and Ansel Elgort as Hazel Grace and Augustus Waters. (Image Credit: s_bukley / Shutterstock.com)

Spoiler alert: this film will make you cry in ways that Nicholas Sparks can only dream of moving audiences.

Ansel Elgort may be the heart throb, but it takes two to bring a romance to life. The other half of this epic romance is Hazel Grace, the role that went to Shailene Woodley. When you think of Shailene, try not to remember that atrocious show, The Secret Life of the American Teenager, but think of The Descendants and Mary Jane Watson in The Amazing Spider-Man 2. That helps, a little bit.

What helps envision these actors in two incredibly profound roles is the fact that the author has given his seal of approval on them both.

John Green wrote on his Tumblr, “I am not particularly concerned with physical looks; Hollywood can fix that stuff. (Remember when Nicole Kidman became Virginia Woolf?) I’m concerned with whether she can embody the voice and experience and life of Hazel. She can.”

He said that Ansel Elgort is a huge fan of the book. Director of the film, Josh Boone, has also sang Ansel’s praises.

“Ansel Elgort is the epitome of the boy John Green brought to life so vividly in his novel and he truly embodies the character traits we admire so much about Gus,” Josh Boone said. “His humor, sensitivity, honesty and confidence floored us. Watching him with Shailene was like seeing the film for the first time. Hearing them say ‘okay’ to each other was incredibly moving. We couldn’t be more thrilled to have found our Gus.”