iTunes released an early streaming of John Mayer’s new album, Paradise Valley, a week before it’s office release. And the consensus is that Mayer’s hiatus from music has just given him time to perfect what he was trying to accomplish with Born & Raised. 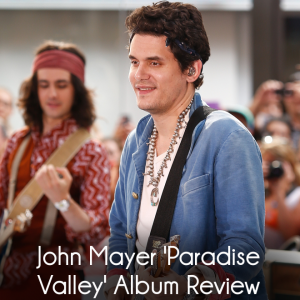 The album is currently available for pre-order through Amazon, and I recommend it more than any album I bought this year. John Mayer’s guitar is the only sound you need in life, next to his voice. The album includes duets with Frank Ocean and Katy Perry, his current lady love.

This album is like your subtle transition from summer to fall. It starts out really airy and breezy, giving you the feeling of a perfect summer day and sitting on a porch with your feet up. The album closes with a song about summer ending and going into the fall. Listening to this album made me want to pack my packs and join Mayer on his ranch out in the country, wearing denim on denim and letting my hair blow in the wind. I wanted to be in Paradise Valley.

The tracks with Katy Perry and Frank Ocean are amazing. Honestly, I feel like Katy Perry and John Mayer make beautiful music together. The Frank Ocean song is very short, but really well done. It sounds different from everything on the album, but in a really good way. The songs on this album compliment each other and really relax the listener.

John Mayer Had 17 Units of Botox In His Vocal Chords

In 2012, Mayer had 17 units of Botox injected into his vocal chords through his neck. The procedure left him unable to say a word for almost four months, but healed a throat condition and allowed him time to heal. He recalled going with his father to the doctors appointment, not knowing what was going to happen, and leaving without his voice.

Since the procedure, Mayer has not taken his words for granted. He’s dating Katy Perry, looking better than ever, and living the simple life on his ranch with his dog. His bad boy days are behind him and this album just shows off the evolution of Mayer’s music.

I recommend this album for anyone that likes John Mayer, obviously, but there are a lot of country music influences in the tracks. If you aren’t a country fan, stay away.