It seems like you can’t talk about John Mayer anymore without bringing up one of his exes – Taylor Swift or Katy Perry. This time, we’re going to tackle Tay Swift.

Mayer just released his song “Paper Doll” and Hollywooflife really thinks that it could be about Miss Swift. Why can’t we just focus on how great the song is? “Paper Doll” is going to go down in history as his rebuttal to Swift’s “Dear John.” 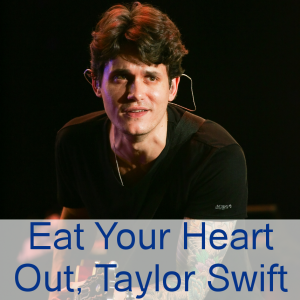 Paper Doll does have some leading lyrics.

Taylor’s song from 2010 really caught Mayer off guard. In an interview with Rolling Stone, he said he was “humiliated” by “Dear John.”

“It made me feel terrible. Because I didn’t deserve it. I’m pretty good at taking accountability now, and I never did anything to deserve that. It was a really lousy thing for her to do.

I was really caught off-guard, and it really humiliated me at a time when I’d already been dressed down. I mean, how would you feel if, at the lowest you’ve ever been, someone kicked you even lower?

I will say as a songwriter that I think it’s kind of cheap songwriting. I know she’s the biggest thing in the world, and I’m not trying to sink anybody’s ship, but I think it’s abusing your talent to rub your hands together and go, ‘Wait till he gets a load of this!’ That’s bulls**t.”

Mayer’s note about cheap songwriting makes me feel that this could be about Taylor and it might not be. He wouldn’t compromise his art to get even, so putting out a very vague song that is excellent as a sort of response is very John Mayer.

I give the song a well done, but it’s music video might be a little unexpected. Mayer cleverly put out a prancercising video to go with the song. While I’m sure he’ll give us a real video should the song become a radio worthy single, this thing will get hidden while I indulge on the song.