No Tom Hiddleston or Loki in Avengers 2, Fans Have Mixed Reactions

I can feel the Tom Hiddleston fan girls revolting from here. Tumblr is probably have a panic attack. Gifs aren’t moving and the word “Whedon!” is being screamed in anger like the words “Moffat!” or “Wheaton!” 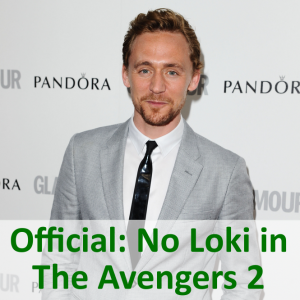 Joss Whedon announced that Loki will not be making an appearance in his highly anticipated follow up to The Avengers. During a podcast with Empire Film Podcast, Whedon was asked whether we’d see Loki belittling any of The Avengers in Avengers 2.

“Imitating what I did before is the surest was to do it and not as well,” he said.

Tom Hiddleston became a fan favorite after Thor, and then became Tumblr’s mascot after The Avengers. Whatever will the franchise do with out it’s horned super-villain? Fans on Hypable have already expressed their sadness, saying that Loki was the only thing that kept them coming back.

What Happens to Loki in Thor 2?

The reason for Loki not coming back could just be because he’s no longer living. We’ll have to tune into Thor: The Dark World to be certain, but it’s almost certain that he has met his fate after failing with the Tessaract. Tom Hiddleston has a six film contract with Marvel, but Loki has angered so many people it’s a miracle that he’s survived this long.

Hypable’s theory is that we’ll see the last of Loki in the end-credits for Thor: The Dark World, and I want to agree. Then again, I’m joining the chorus of “Whedon!”