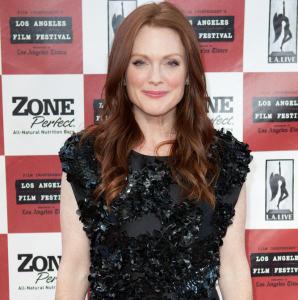 The Hunger Games is shaping up it’s cast nicely. Jennifer Lawrence and Josh Hutcherson are just indescribably excellent. I was reading the first book and imagined Stanley Tucci as Cesar Flickerman and Phillip Seymour Hoffman as Plutarch Heavensby.

For the role of President Coin in The Hunger Games: Mockingjay, two prominent names are being thrown around. Juliane Moore, who won a Golden Globe for Game Change, is in the lead to snap up the role. According to Deadline, the move will happen quickly.

The Hollywood Reporter mentioned that Jodie Foster was also considered for the role.

When I read the books, I imagine President Coin as a tough Helen Mirren with a silver crew cut. The leader of District 13 has to be no nonsense and purposeful to a fault. I feel like either of these actresses would be an excellent choice for the role, but I’m partial to Moore. Foster would be good, but Julianne Moore as a red head in charge of District 13 will bring in so many ginger jokes.

The jokes are not why I think Moore would be a good choice for the part, I just have a good feeling about her. We’ll just have to see what happens. San Diego Comic Con, aka my Christmas in July, is coming up in just a few weeks. I would say an announcement could be made there or earlier.

Who would you cast in The Hunger Games: Mockingjay as President Coin? And do you have a favorite book to movie cast?