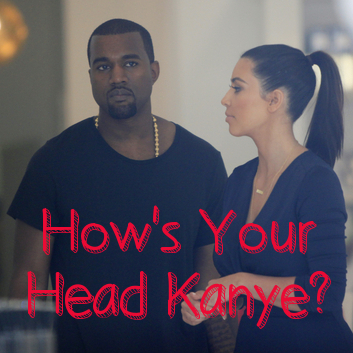 Kanye West can’t have nice things. First he smashed his face in a pole, then his assistant crashed his Lamborghini. All in the same week. Life is so hard. (Joe Seer / Shutterstock.com)

Life is rough when you are Kanye West. First there is everyone hating on you for getting drunk and insulting Taylor Swift. That was just about to blow over when he started getting hot and heavy with Kim Kardashian, the queen of gossip. Then he knocked her up and now Kanye West is knocking into things.

It’s only a matter of time before someone starts a Tumblr for “Kanye West Hits Stuff.” This week alone, two of Kanye’s most precious posessions, his Lamborghini and his face, have smashed into things. If you’re having a stressful week, this should help.

This is why Kanye West can’t have nice things. I wonder if Kanye will make his assistant pay for this. The Lamborghini’s windows are so dark that I’m not surprised he crashed into something.

It’s OK to laugh, right? Kim and Kanye get distracted by the amount of photographers, and walking with their heads down, Kanye walks straight into a street sign. His forehead now bares a nasty gash. Kim came to her man’s rescue. She shielded him and babied him, leading him into the restaurant.

In the video below, Kanye comes back to yell at the photographers. Watch until the end for the epic screaming match. I can’t wait for “When Kanye West Attacks 2.”