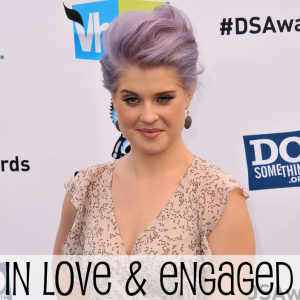 Matthew Mosshart popped a big question to his lady love, Kelly Osbourne, and she said yes! The engaged couple is already thinking about starting a family. Featureflash / Shutterstock.com

Kelly Osbourne is in love and she’s not afraid to broadcast it to the world. While she was initially mum on the subject of marriage with her boyfriend, Matthew Mosshart, Hello! magazine is reporting the two are officially engaged to be married! I couldn’t be happier for my lavender haired heroine.

Mosshart told the magazine that he popped the question on a balcony overlooking the ocean in Aguilla.

“It was beautiful,” he said. “She said yes! A then she smiled for the rest of the night.” Kelly has only been photographed looking absolutely blissful with Mosshart, so we can only imagine her ecstatic smile now!

Osbourne’s engagement ring might look familiar to some. It’s inspired by an earring her father, Ozzy Osbourne, use to sport.

“I designed it to look like an earring that my father wore,” she said. “I used to hold my finger up to his ear when I was little and say: ‘I want a ring like that.’ Now I have one!”

Osbourne was previously engaged to Luke Worrall in 2009. The couple split in a nasty public breakup a year later.

Kelly Osbourne: Matthew Mosshart is “The One”

The lavender haired lovely and her beau with long flowing locks are already thinking of starting a family and getting this wedding party started. I for one can’t wait to see how Kelly would be as a mom. This just means we get to see a lot more of her adorable man by her side.