It has been confirmed! Kim Kardashian gave birth to a baby girl Saturday June 15, 2013, at Cedars-Sinai Hospital in Los Angeles. Kanye West was right by her side the whole time, reportedly leaving the listening party for his upcoming album Yeezus, after being told Kardashian was feeling ill.

Kardashian did have the baby girl five weeks early, according to E! Online, but luckily the birth was natural and both Kim and baby are doing fine. A source told E! Online, the baby weighed “under five pounds,” and looked just like her mommy saying, “She has dark hair. She looks just like Kim.” 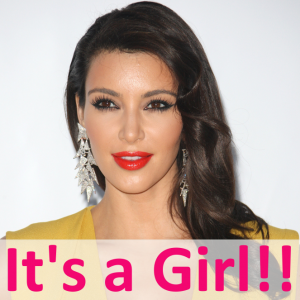 Unfortunately,  we will have to wait a few weeks to find out the baby girl’s name. According to E! Online, Kardashian told friends the name will start with a K. No surprise there. Perhaps they are waiting to reveal the baby’s name on Keeping Up With The Kardashians, the added suspense will surely increase ratings for the popular show.

There was an out pour of congratulations, following the news of Kim and Kanye’s baby girl. It seemed to be the talk of the day, as everyone was sure to show the new parents some love!

Kris Jenner, grandma to the new born baby girl, was gushing with excitement when she told E! Online, “We’re happy, everybody’s good and she’s beautiful.” The proud new grandma was more than happy to talk about the newest bundle of joy in her life.

Adrienne Bailon, who dated Kim’s brother, Rob Kardashian and had a rather messy public break up, was also in line to congratulate the new baby. She told E! Online, “I am just so happy for them and I hope they take this time and soak in every moment with the baby.” Babies really do bring out the best in everyone.

Russell Simmons gave some fatherly words of wisdom to the two first time parents. “There is no greater gift in life than a child’s laughter! congrats to Kim And Kanye.”

There were many more stars that reached out to Kanye and Kim. Amare Stoudemire, Tracy Anderson, Lisa Gastineau, Rachel Roy, Beyoncé, Demi Lovato, Maria Menounos, Kevin Hart, and DJ Pauly D, all reached out in some way to say congratualtions. These are just a few of the millions of people who have tweeted and updated congratulations to Kim and Kanye since Saturday.