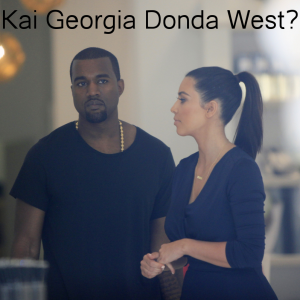 While I still have my money on Kimye West, Kim and Kanye are keeping mum about their baby name. There has been no official announcement, but sources told HollywoodLife that they have a favorite.

“Kai Georgia Donda West,” is a strong contender according to a family insider.

We knew the name would start with a K and both Kai and Kaidence have been tossed around. Georgia is for Kim’s father, Robert Kardashian, who’s middle name was George. Donda is the name of Kanye’s later mother who past  in 2007.

Kim and Kanye want the name to be sentimental, but Kim is also controlling the release of the baby name. She has not filed any name at the hospital to keep employees from spilling the name before she is ready. Who can blame her? The new mommy is most likely enjoying the only time in her daughter’s life when she will be all hers. After the name is published, Kai or Kaidence will be everywhere.

Not only will Kim and Kanye be moving into Grandma Kris Jenner’s illustrious pad with the baby, but they’re hiring a nurse to help for the first year. US Weekly reports that the nurse also helped out with Kourtney Kardashian’s baby Penelope. The nurse will wear a custom black and white uniform.

An insider told HollywoodLife that Kim is “a bit freaked out about everything.” Living with her mom and having the baby nurse will definitely help, but do you think she’ll be as hands-on with her kids little sister Kourtney? Only time will tells.