For the first time in her life, Kristen Stewart has been smiling. The media has caught her hanging with friends, smiling, driving around, smiling, and eating lunch, smiling. After breaking up with your long time boyfriend and the guy that took you back after you cheated on him, I’m confused. 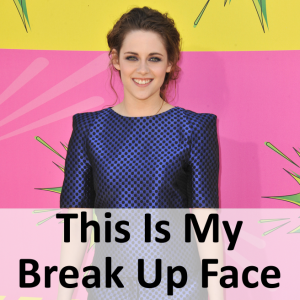 Nevertheless, K.Stew has been downright cheerful since her reported split and Rob Pattinson has been the one that was melancholy. That is, until June 13. A fan spotted the ex-couple in Echo Park between Pattinson’s press junket for Dior. They were said to be smiling, holding hands and laughing.

That sounds like together to me! Even though the couple left seperately, they were also found at a Starbucks. Twitter user Jane Misserati found the couple in Echo Park and HollywoodLife and E!News jumped for joy.

Are Kristen Stewart & Robert Pattinson Back Together?

E! Reported that Stewart and Pattinson were dressed casually and Rod was acting “protective” or her. Kristen was seen laughing at his jokes. Even though reports have her turning to family and friends for comfort, we’ve seen Stewart in a jolly mood. Maybe frowning means happy and smiling mean sad for her?

Kristen, I’m going to give you the same advice Tina Fey gave your silly friend Taylor Swift. Take some time for yourself and don’t date for a while. Also, your smile is really pretty, keep it around.