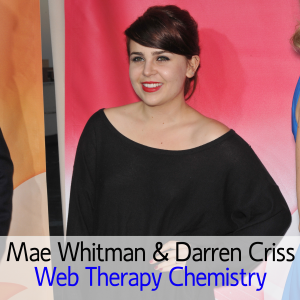 In the latest episode of Web Therapy starring Lisa Kudrow, Mae Whiteman and Darren Criss make a guest appearance. Kudrow plays Dr Fiona Wallace, a therapist that has no idea what she’s getting into with Augie (Criss) and Blair (Whitman).

Despite not being in the same room, Whitman and Criss have fantastic chemistry. They are in a “cybership” and have never met. Dr Fiona doesn’t understand the concept of a long distance relationship that is completely online.

Blair and Augie have been in a cyber relationship for two years. They run a website together and have fans and followers of their relationship on Facebook.

“I want you to BRB with other people so that you can LOL with me.”

Augie stopped following Blair’s Instagram and changed his passwords. Their relationship was going well until their started talking with Dr Wallace. While it’s a hilarious look at a 2013 relationship, I bet some people really have these problems.

Instead of deleting cell phone numbers, Blair threatens to delete their Skype accounts and break up. Followers, passwords, likes and social media run this relationship and meeting in person threatens that.

When they finally meet, their relationship is hot and heavy. Augie is a little awkward, especially because he’s just used to the front of her face and cyber fooling around. Blair is the world’s most awkward person when making out.

The couple finally has to get a short distance apart to get their spark back.

Web Therapy is a scripted series with a lot of improv. Several big names have guest starred on the series, including Jane Lynch, David Schwimmer, Rosie O’Donnell and Conan O’Brien.