Friday, May 24, 2013, edition of Good Morning America featured a special guest performance by Mariah Carey. The artist was dressed in beautiful Versace gown, looking stunning as usual. However, Carey seemed rather unprepared for the appearance.  She complained to host, Lara Spencer, saying she’s “never up at this hour,” as reported by Us Magazine. They also described Carey as dealing “with early-morning grogginess.” 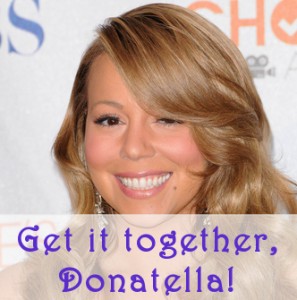 Mariah Carey was not all sunshine and butterflies when her Donatella Versace dress split open on Good Morning America. Get it together, Versace! s_bukley / Shutterstock.com

While the golden Versace gown was stunning, it did seem a little tight, particularly in the chest area. While on stage, preparing to perform and doing a live preshow interview with Lara Spencer, a host of Good Morning America, Mariah Carey announced, “Oh shoot, now the back of my dress just popped.”

While her team of stylists rushed to repair the gown, Spencer tried to defuse the situation. Meanwhile, Carey went on holding her chest awkwardly, to avoid any potential exposure, and making jokes about the situation.

“What should we call this, the Central Park Saga? It seems like a YouTube moment, possibly a Spotify moment!” Carey even made it a point to call out Donatella Versace by name. Seconds after the dress pop happened she said, “I love you, Donatella, but it popped, darling.”

Lara Spencer Remained Professional While Trying to Defuse The Mishap

Lara Spencer continued to try to defuse the wardrobe malfunction, while Carey continued to make jokes and bring attention to the situation. Spencer also held her composer, not laughing or joking about what could have been a very serious situation. She even helped Mariah Carey hold up her dress, to ensure there was no chance for anything to slip out.

Us Magazine says the host “deserves a Nobel.”  Since the 2004, wardrobe malfunction with Janet Jackson at the Super Bowl half time show, television personnel have become very careful to not let it happen again.