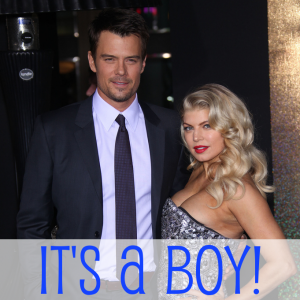 Stacy Ann Ferguson no longer exists. Neither does Fergie. From now on, you’ll call her Mrs. Fergie Duhamel. On July 10, Fergie petitioned to change her name legally to Fergie Duhamel. She and actor Josh Duhamel have been married for four years, reports E! News. Her official hearing for her name change is on August 16. Let’s just hope she makes it and isn’t in the hospital giving birth to her first child.

She states in the petition that Fergie is, “the first name which she is commonly and professionally known as, and has been for many years.”

On an episode of Live! with Kelly & Michael, airing July 17, Josh Duhamel played a game and was asked to choose the baby onsie, blue or pink. He hesitated before grabbing the blue onsie and proudly showing the camera.

Fergie and Josh announced they are welcoming a baby back in February. Fergie’s due date is late August or early September.

Duhamel told Chelsea Lately in April that the could is “over the moon about it” and they’ve been trying for a baby for a while, “I think it’s a beautiful thing.”

Since the announcement, Fergie said Josh Duhamel has been the perfect husband and daddy. She said he sings to her baby and is very good to her. He and Fergie know they want to raise their baby right.

Congrats on the baby boy, Josh and Fergie Duhamel!