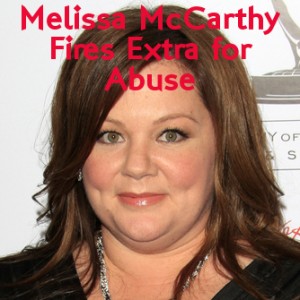 Melissa McCarthy fired an extra from the set of her film, Tammy, for abusing their child during shooting in Wilmington, North Carolina on Tuesday. Helga Esteb / Shutterstock.com

You don’t mess with Mama Bear. Melissa McCarthy is a mother first and an actress second, she’s very upfront with that. So when she saw an extra on her set abusing a child, she pounced.

The Bridesmaids star and her husband Ben Falcone are directing Tammy in Wilmington, North Carolina. An extra in her 20’s brought her young child to set for a shoot by a lake. TMZ reports that the young mother was having problems with her child all morning and was loud enough to disrupt production.

McCarthy saw the mother jerk her child up in the air by the wrist. She immediately had the extra taken off set, “saying she wouldn’t tolerate abuse on her set.” Extras are paid a standard of $58 a day.

Did she do the right thing or should Melissa McCarthy have kept out of it?