Melissa McCarthy has been getting flack for her weight for too long now and the actress isn’t afraid to tell the haters to can it. The actress has worked with A-List names, cough cough Sandra Bullock cough cough Bridesmaids cough cough, and is trying so hard to promote her film The Heat. What should be an exciting and fun time in McCarthy’s life is trampled upon by people like The New York Observer‘s Rex Reed. 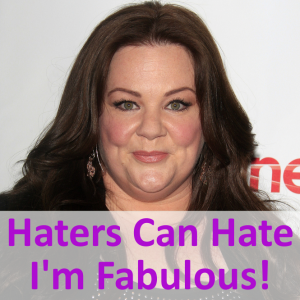 Reed called McCarthy “tractor-sized” and “a gimmick comedian who has devoted her short career to being obese and obnoxious with equal success.” Tell us how you really feel, dude.

In an interview with The New York Times, McCarthy responded to the comments with grace and poise. You go, girl!

“Why would someone OK that?” she asked. “I felt really bad for someone who is swimming in so much hate. I just thought, that’s someone who’s in a really bad spot, and I am in such a happy spot. I laugh my head off every day with my husband and my kids who are mooning me and singing me songs.”

She went on to say that “it may have crush me” in her twenties, but she’s come to realize that the public eye has “a strange epidemic of body image and body dysmorphia” and the comments like those from The Observer “just add to all those younger girls that are not in a place in their life where they can say, ‘That doesn’t reflect on me.'”