It seemed that this week was full of horrible celebrity photoshops and mishaps. Beyonce was sketched in a flowing dress by designer Roberto Cavalli. While it’s a stunning image, it doesn’t do Queen Bey justice. Cavalli drew a stick thin Beyonce that appears more like a caricature than fierce realness. The dress featured was designer for Beyonce’s Mrs. Carter World Tour. Cavalli’s camp sent out a press release today with the picture and E! News reported the extremely strange appearance of the bootylicious star.

Don’t worry though, Beyonce is still as curvy as before. But seeing as how you cast Beyonce for her curves and healthy body image, this is just ridiculous. 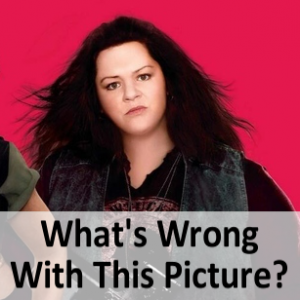 Melissa McCarthy Photoshopped on The Heat Poster in UK

The most ridiculous photoshop of the week goes to Melissa McCarthy’s face and neck on the poster for her film The Heat in the UK. McCarthy stars as a rough and tumble cop alongside put together Sandra Bullock. McCarthy’s curves are as much of her persona as Beyonce’s, so why the UK stretched out her neck and blended away her chin is a mystery.  Buzzfeed took an in depth look at the poster and it appears that McCarthy’s eyes have even been enhanced.

A beautiful, curvy girl, McCarthy has become a source of confidence for women around the world. Proof that mainstream society can fall in love with another body type. This poster and photoshopping just sets all that progress back. Thanks, England.

The most subtle, but noticable of this week’s bad photoshopping goes to Marie Claire. Can you tell the starlet on their summer cover? It looks like Jennifer Lawrence, but it’s really Lauren Conrad from The Hills. Marie Claire has obviously taken the very pretty Conrad and amped up her eyes and hair. You can really tell in Conrad’s face. Her chin, cheekbones and forehead have been tampered with.