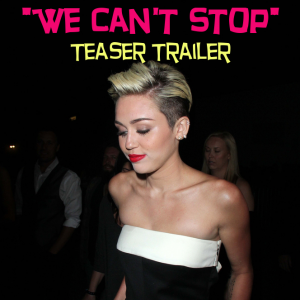 As she’s proved time and time again, you can’t stop Miley Cyrus. She’s going to rise again and again with something new to bring. This has been a big month for the singer and party animal, from her single release to her parents divorce. Now, Cyrus is teasing her video for “We Can’t Stop,” expected to be released tomorrow.

Miley tweeted two videos, both extremely short, for the video. She proves that it’s her party and she will do what she wants. The first video has Cyrus in the middle of a pool and her friends jump in around her. Splashing and screaming ensue.

The second video is a little longer and includes a little bit of the song. The first video was not set to any music. The second teaser has Cyrus singing on a cliff with some friends looking out onto a California sunset. She wears a beanie hat with a black veil, short shorts and a cropped tank. Her bright red lips sing along while she bobs her head and closes her eyes.

So far, Miley’s party looks pretty tame. No twerking, no dancing, and no drugs are seen. We’ll have a full review of the video tomorrow. I have faith in Miley, she won’t disappoint.