The days of Disney Channel are far, far behind Miley Cyrus. She’s ready to get partying and is never going to stop. While the song isn’t the direction I’d like to see Miley take, I’m starting to understand her more after “We Can’t Stop.” 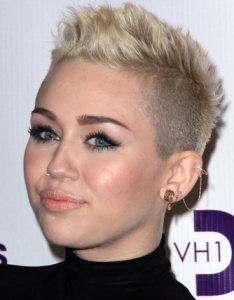 Miley Cyrus controversial lyrics to “We Can’t Stop” have listeners in a tizzy. But should we be reading this much into Miley’s life? (Helga Esteb / Shutterstock.com)

Miley is not a Disney star anymore. She’s no long “Just Miley” that everyone remembers, but I’m starting to wonder if she was ever that girl we all thought she was. Yes, she donned a blonde wig for years and sang about being starry eyed over a boy. We watched her grow up, but that doesn’t mean we knew Miley. Who are we to judge Miley?

“Remember that only God can judge ya, forget the haters, because somebody loves ya.”

“It’s my mouth I can say what I want to.” I actually admire Miley’s bravery to sing these lyrics to the world. She doesn’t care what you have to say about her, she is here to live life. Haters can get out.

Yes, Miley has had some rough patches. She’s had break ups, make ups, Twitter feuds, wardrobe malfunctions… but was any of it really worse than any other normal 20 year old? I don’t think so. Miley Cyrus is actually pretty boring. The most exciting this about her is her on again, off again romance with Liam Hemsworth, but that’s pretty slow going.

Yes, she mentions doing drugs. Take any Jay-Z song. He drops the N-word like it’s no big deal and no one says a word because he is Jay Z. While the public thinks Miley should have better morals and be a role model, she’s focusing on herself, her brand and who she is. If she doesn’t want to stop, we shouldn’t make her.