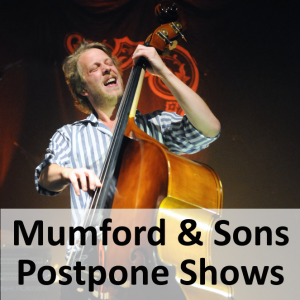 Mumford & Sons’ bandmate and friend Ted Dwane was hospitalized after not feeling well.He is recovering from surgery to remove a blood clot on his brain. TDC Photography / Shutterstock.com

We’re sending a huge get well soon card to Mumford & Sons’ bassist Ted Dwane. he is currently recovering from surgery to remove a blood clot from the surface of his brain.

A statement from the band reads, “Our friend and bandmate Ted has been feeling unwell for a few days, and yesterday he was taken to a hospital to receive emergency treatment.”

Scans of Dwane’s brain revealed the blood clot on the surface of his brain and he was sent into surgery. The band assures that their friend and multi-instrumentalist will have a speedy recovery. Fans have taken to posting get well messages on the band’s post and expressing their love for the band. The fans are not upset about the concerts being postponed, they are posting their love for the band and support from all over the globe.

Due to Ted Dwane’s recovery, the band has decided to cancel three of their upcoming concerts. Tuesday June 11 in Dallas, Wednesday June 12 in Woodlands, and Thursday June 13 in New Orleans are all being rescheduled. Tickets from these shows will be honored at the rescheduled dates.

The band wrote that they have no plans to reschedule of cancel any other performances along the current tour. They’re next performance is June 15 at the Bonnaroo Music & Arts Festival in Manchester, Tennessee.

Mumford & Sons are currently on tour promoting their sophomore album Babel. The album won the Grammy for Album of the Year and sold 600,000 units in 2012, according to E! News.