Once Upon a Time Season Three Looking for a Rufio 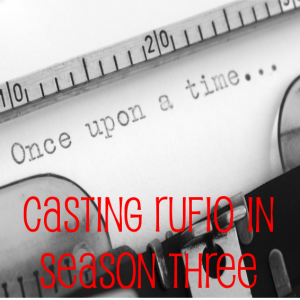 The chants of his name filled Neverland and enervated Robin Williams to no end. Nevertheless, Rufio was a staple in Hook and it looks like this fan favorite character is getting  a second life in Once Upon a Time.

Season two of OUAT left us dying for more. Henry had just been stolen away to Neverland, an alternate universe where Peter Pan was the villain. Captain Hook’s ship was taking the Charmings, Rumpelstiltskin and  Hook to Neverland to get Henry back. The last thing we saw was Pan’s henchmen taking Henry to Peter Pan.

“The character, per lore, is described as forever youthful, mischievous and harboring a penchant for clever games — but behind his playful façade lurks a petulant child twisted enough to destroy anyone who crosses his path,” reports TV Line.

While they believe that King Joffrey would be a good fit, I’d like to see a heartthrob in the role. Hey, Zac Efron, what are you up to?

Once Upon a Time Season Three Casting New Robin Hood

Another casting surprise is that OUAT is looking to find a new Robin Hood. Tom Ellis is unavailable for the recurring role, so the producers will be looking for someone.

Once Upon a Time Keeping Peter Pan Casting a Secret

While ABC has yet to release it’s premiere dates for season three of OUAT, they’re also keeping mum on who they’re casting as Peter Pan. It’s going to be one of the biggest reveals of the year, next to the new Doctor Who.

Any guesses as to who will take the role of Peter, Robin or Rufio? Tell us who should play them in the comments.